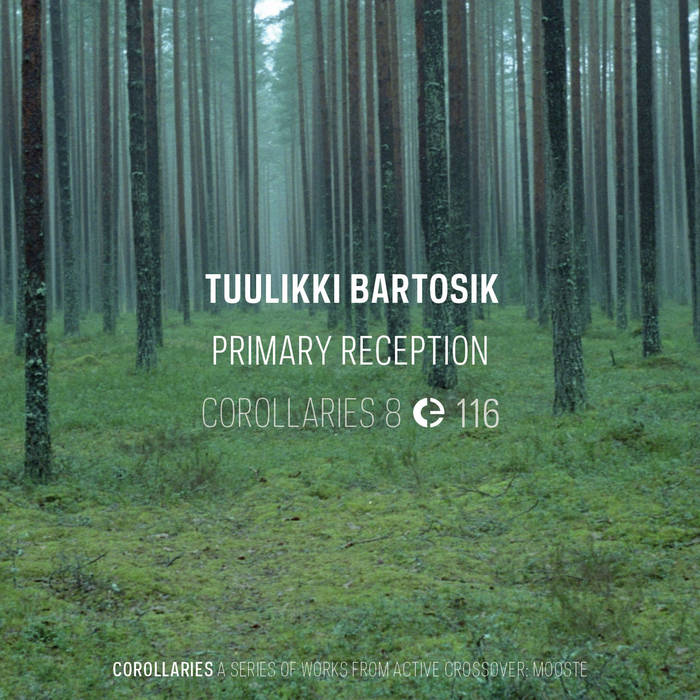 This is the eight release in the series Corollaries, that compiles works resulting from Active Crossover: Mooste, a cross-cultural collaborative residency curated by Simon Whetham and hosted by MoKS, in April and May 2015.

Playing and composing music, which easily becomes about making an end product by putting sounds together and shaping them in certain ways, is not the same as working with sound as a natural force. Sound generated by whatever, that happens whenever, exists independently from music, yet through cultural constructions, eventually may lead to it. While making music and feeling the importance of the surrounding space I can feel unity between different senses: to hear, to feel, to move (while I am playing), with sound, through “recording-listening-playing”.

This is a reminder that, “answers are here all the time” — in the wind, trees, water, steps, everything which is around me and within me. I just need to hear and listen instead of going randomly through my head searching for an answer of how to play.

I have worked with traditional music for over 20 years and it is easy to get stuck in the codes of tradition. I think about what we exclude in music making (or other art forms) when we only focus on tradition, as it should be done, instead of just listening ourselves and letting musical creation flow.

What do I react to while I am playing? From time to time I am affected by traditional music patterns of melody and rhythm while improvising. During Active Crossover, I found myself thinking “the less we hear, the more we listen”. I should not to be afraid of limits, to dare to go beyond them, to see what is there to explore. I don't have anything to gain while playing, if it happens in the ‘here and now’, as a process of connecting emotions and feelings to the conditions of my surroundings.

Music by Tuulikki Bartosik.
Recorded and arranged by John Grzinich.
Material for Primary Reception was recorded as an exercise in responding to ‘natural acoustics’, in this case the unique reverberant open space of a pine forest in South Estonia. Here the reverberation is not used as an added effect but as an instrument of equal significance to the musical evocations of Tuulikki Bartosik, the wildlife and ambient noises that are captured by the microphones without discretion from the environment as a whole. Additional material was used from an initial ‘percussive’ exercise recorded during Active Crossover on May 11th 2015 (with Simon Whetham, Eamon Sprod, James Wyness, Dawn Scarfe and John Grzinich).
Mastered by Miguel Carvalhais.
Cover photos by John Grzinich.