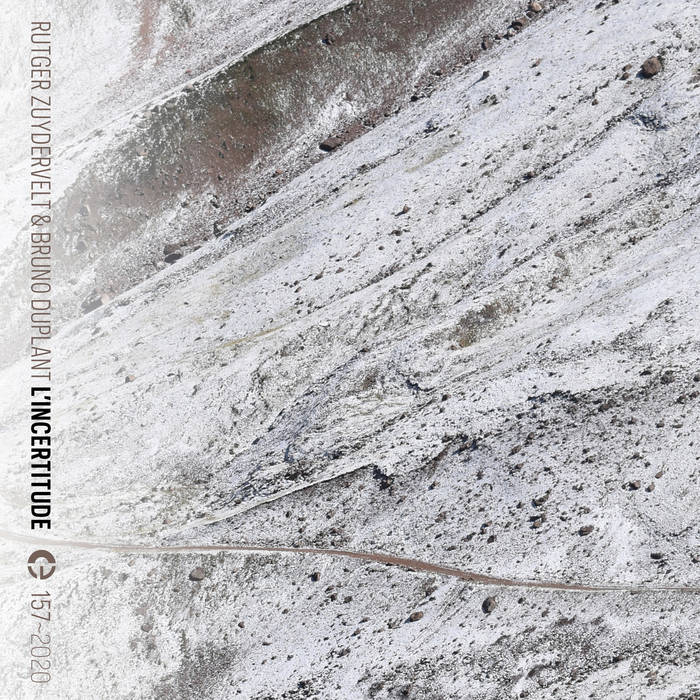 L’incertitude, is Bruno Duplant and Rutger Zuydervelt’s first album as a duo. It came together very naturally, as if they played together for years already. There were no long discussions or conceptual heavy-handedness, these two tracks of pure sound exploration in the most intuitive sense, just flowed from the remote collaboration and the back-and-forth swapping of materials and compositions. The core of the collaboration rested upon trusting each other’s capabilities and on the mutual appreciation for each others' work. These two collage-like trips are loaded with suggestions of (otherworldly) spaces and places, but it’s the listener’s imagination that has to fill in the blanks.

Bruno Duplant is a prolific composer and musician living in the north of France. He has collaborated with many musicians around the globe and has also made solo works. His recordings have been published by several labels, including his own label, co-curated with Pedro Chambel, Rhizome.s. For Duplant, composing and playing music is similar to imagining, creating, and sometimes decomposing new spaces/realities, and new entities. But it is also a reflection on memory, not the historic one, but memories of things, spaces, and moments. His music, strongly inspired by the writing of Francis Ponge, Gaston Bachelard, Antoine Volodine, and composers as John Cage, Luc Ferrari, Eliane Radigue, or Rolf Julius, is imbued with a sweet melancholy.

Rutger Zuydervelt — also known as Machinefabriek — combines elements of ambient, noise, minimalism, drone, field recordings and electro-acoustic experiments. His music can be heard as an attempt to create sonic environments for the listener to dwell in. Finding tension in texture, tone and timing, the result can be very minimalistic at first glance, but reveals its depth upon closer listening. Zuydervelt was born in 1978 in Apeldoorn (The Netherlands) and now resides in Rotterdam. He started recording as Machinefabriek in 2004 having released extensively.He also composed for dance performances and films, and collaborated with various artists — Michel Banabila, Gareth Davis, Steven Hess, Sylvain Chauveau, Aaron Martin, Dirk Serries, Dead Neanderthals, and many more.