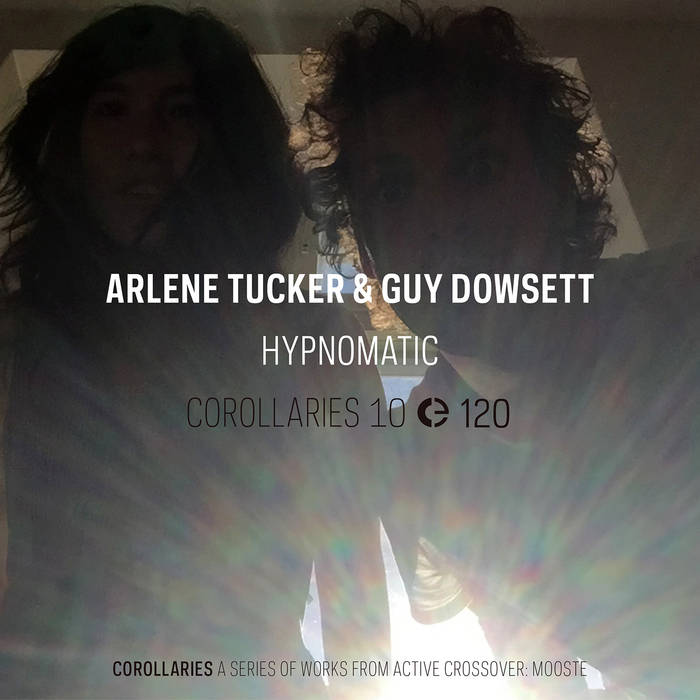 This is the tenth release in the series Corollaries, that compiles works resulting from Active Crossover: Mooste, a cross-cultural collaborative residency curated by Simon Whetham and hosted by MoKS, in April and May 2015.

Arlene Tucker and Guy Dowsett approached the Active Crossover: Mooste field recordings as a pallette for exploring physical as well as psychological space. Layers of unlikely sound combinations were woven into textures and squeezed in and out of different environments. It became an exploration of sound’s relationship to outside and inside space, as well as psychological headspace. Hypnomatic is a sonic interplay between foreground and background, the conscious and unconscious. Sound is encouraged to fluctuate between focus and blur.

Arlene Tucker is interested in adding play elements to daily life through her art. Inspired by translation studies, she explores how communication can be transposed and transformed, paving the way for unforeseen dialogue to develop. In her works, attention is given to the process of meaning making as she finds ways of connecting and understanding our shared environments. During Active Crossover: Mooste she, along with Simon Whetham, Fernando Godoy, and John Grzinich, put their ears to the ground and eyes towards the sky to try and capture the space between.

Guy Dowsett’s music fuses aural intricacies with colourful atmospheres. His compositions have been performed in concert halls as well as tiny rooms, up trees and in caves. They have pushed acrobats off ropes, perked up puppets and brought out the worst in onscreen psychopaths. Recent collaborations with physical and multi-channel public art installations have taken his sounds outside, sometimes into noisy environments. In such a setting the already existing sounds form an integral part of the sonic expression.

Just as Active Crossover: Mooste has paved possibilities for more works to happen Hypnomatic has also morphed into a platform for other forms of creativity. Andrew Steinmetz, Arlene Tucker, and Nathan Williams collaborated on a series of collages, which are a translation of Hypnomatic. From sounds to cut up images, the piece scored a way for stories to multiply.

Hypnomatic was implemented into IMPLANTS, a sound installation made by Guy Dowsett for Zodiak Centre of New Dance, with support from Aalto University, situated at Antinniitty, Kannelmäki, Helsinki. Elements of Hypnomatic were used in Puutarhatanssit, choreographed by Jenni Koistinen and in the dance performance, Sounds of Terra, performed and choreographed by Hanna Pajala-Assefa. The dancer wore sensors and actively manipulated Dowsett’s sound design with her body movements. Active Crossover: Mooste’s sound archive was integral to this innovative performance.