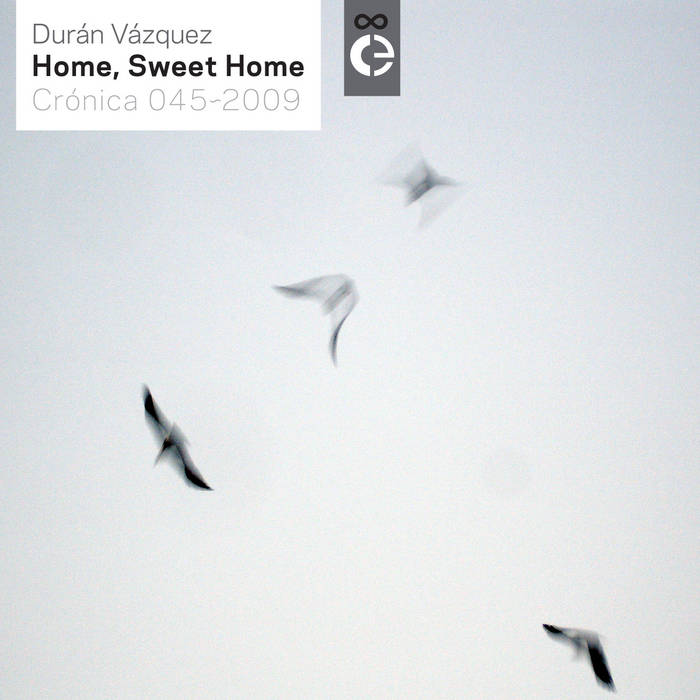 All the pieces in Home, Sweet Home use soundscapes as compositional resources that are able to testify a social, historical and geographical context, to which is implicit an emotional and aesthetic component. With electronic synthesis and manipulated recordings, Durán Vázquez developed each composition from the fusion of truth and fiction, employing a well-balanced number of elements that never fill the entire gamut of frequencies but that always develop harmonics that catch the ear of the listener.

Pictures From The Atlantic City Of Vigo is an electroacoustic composition with several field recordings that are assembled as shots in a cinematographic montage.

Building uses a series of succeeding recordings that follow from within each other, always finding some conceptual connection point in air, wind and pressure.

Cars is composed from synthesized sound, developing an artificial soundscape that reminds the sounds of car horns in a city.

In Alarm, Anxiety, Eagerness we can hear the young boys and girls of a grammar school over the carnival festivities. Their sounds picture an agitation that is characteristic of their age, but it is also the reflection of other social tensions, more complex and buried, that find a link in those other sounds of alarms and sirens.

In Boat Dockage the studio sounds converge with field recordings of the piers at the Cíes islands, in the Vigo estuary.

Finally, Seagulls is composed from the recordings of the colonies of birds at the Cíes islands. All the audio montage revolves around the dramatic moment when two adult seagulls attack a younger bird, breaking the peacefulness of the moment.

All tracks composed and produced by Durán Vázquez between April and May 2008 in Vigo. Mastered by Miguel Carvalhais in August 2009. Cover photo by Pedro Tudela.