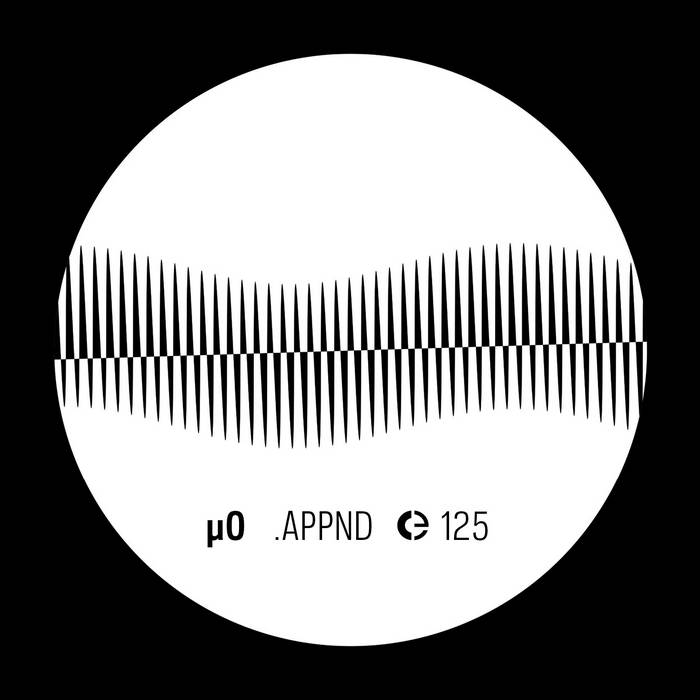 Crónica is delighted to present, for the first time in digital format, the collaboration of Jonas Olesen and Morten Riis as μo.

.appnd is an EP with six tracks of abstract electronic music composed by Danish composers Jonas Olesen and Morten Riis. The music is edited versions of excerpts from live performances from 2005 to 2010. Jonas Olesen and Morten Riis played a series of improvisational concerts during this period, primarily with analogue instruments, such as modular synthesizers and home-made electronic devices. The recordings are as such, not a documentation of these concerts, but rather radically edited versions of these. The raw sound material went trough a series of digital processing sessions, editing long concert sessions down to the length of a single track. The tracks reveal themselves for the aware an mindful listener as delicate quite endeavors in investigating the relationship between silence and noise, between the audible and the non-audible, between the form and detail. These sonic and aesthetic experiments use the entire dynamics and frequency range, thus making of .appnd an appreciate alternative to the over-consumption that defines the current reality of music listening. Due to the rather extreme frequency content of the audio, this digital version has a different sound than the vinyl.

Jonas Olesen (1979) is a sound artist and composer living and working in Copenhagen, Denmark. He runs the label BIN.

Morten Riis (1980) holds a PhD degree from Aarhus University and is educated in electronic music composition from the Royal Academy of Music, Aarhus. He currently holds a post doc position at Aarhus University, and was director of electronic music composition at the Royal Academy of Music 2013-2014. Besides his academic work he is a very active sound artist having received numerous grants and commissions, released several albums, played numerous concerts and exhibited sound installations in Denmark, Sweden, England, France, Poland, Finland, Germany and China.

All music by Jonas Olesen and Morten Riis. Mastered at Dubplates & Mastering, Berlin Originally released by BIN in 2010 as a limited 10" white vinyl.