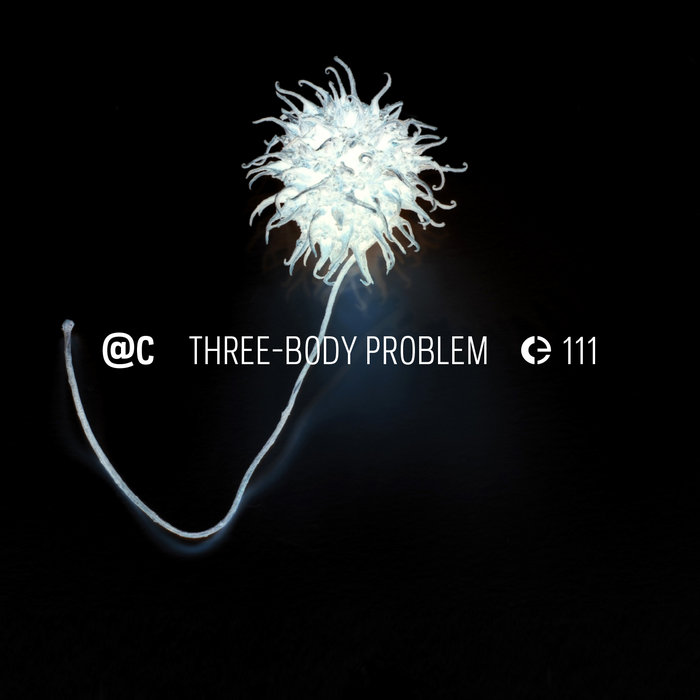 Three-Body Problem is @c’s sixteenth full-length album, and their eighth in Crónica. Like the previous Ab OVO, this album started as a soundtrack for the puppet theatre play Agapornis, premièred by the Teatro de Marionetas do Porto in October 2014, and inspired in the life and works of Anaïs Nin. Three-Body Problem was (re)composed after the première of Agapornis, therefore it is not its soundtrack, but it is intimately intertwined with it, resulting from two sequential processes of composition.

The first of these lead to the play’s soundtrack. It was developed with the company during the rehearsals and work sessions in the process of creating Agapornis. Built to a script with two female characters (played with puppets) that were two poles over which the soundtrack should be developed, the composition started with an invitation to Angelica V. Salvi (harp) and Susana Santos Silva (trumpet) to record solo parts. These parts were used as building blocks, as two attractors over which 21 pieces grew, almost by aggregation.

The post-première stage of composition was focused on the album. This did not try to recreate the play, but rather to revise and recompose the music, building a related work that would inevitably draw much more than inspiration from the play.

In Agapornis, a third character with several spoken lines was played by an actor. In this second process, that symbolic role was enacted by the interventions of João Pais Filipe (cymbals and bells) and Ricardo Jacinto (cello and electronics), two musicians with whom @c have collaborated in the past. By doing new studio recordings at later stages of the composition, or by using archival material from previous sessions, these two new collaborations helped to bring Three-Body Problem to its final form with the 9 tracks now published.

Three-Body Problem resulted from a long, slow, and matured process of composition, spanning more than two years. This process resulted from the need to allow pauses in the compositional process, to allow memory to fade, and surprise to come into effect when (re)listening to the works in progress. But also to allow other works developed during that period (as live performances or sound installations) to contaminate, and occasionally infiltrate, the pieces.

This album goes to the core of @c’s working process: a process that emphasizes collaboration; a process that is highly conceptual and very structured but that embraces and searches for emergence; a process that is very plastic, treating sound as matter to be shaped and modelled and from which to grow the pieces; a process that is encompassing and dynamic, developed between studio, stage, rehearsals, performance, audiovisuals, installations, and other activities.

All pieces composed by @c (Pedro Tudela & Miguel Carvalhais) in 2014-2016 from the original soundtrack to Agapornis, by Teatro de Marionetas do Porto, premièred in October 2014.