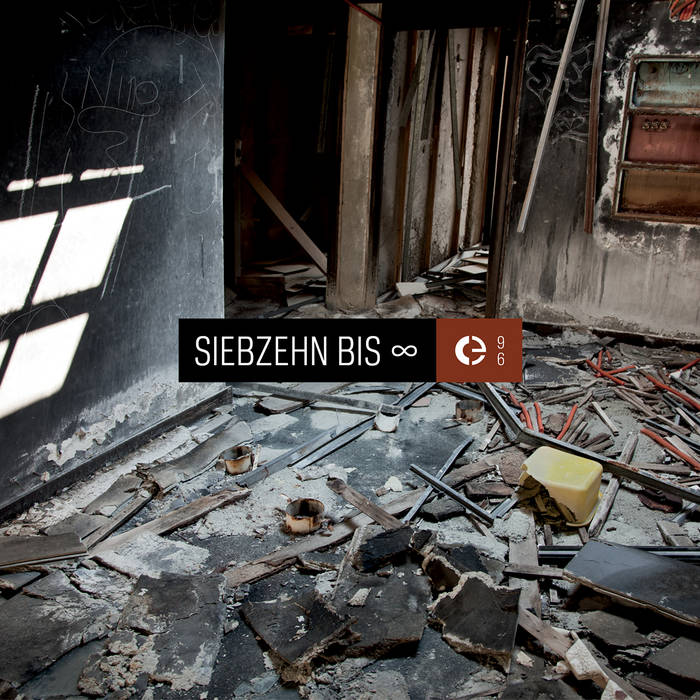 "siebzehn bis ∞" is tied with the previous work eins bis sechzehn, recorded within the ruins of a hotel complex at the Croatian coast in 2011 and released in 2012.

These ruins situated in the Župa Dubrovačka area are silent witnesses of once mono-functionally used areas resembling each other by their interchangeability and absence of history. Massive holiday resorts — typical Heterotopian spaces as defined by Foucault.

Out of decay, the plundering and destruction of new forms of existence (milieus) has developed. The interchangeability and uniformity of the former transit space is annulled by new specific characteristic features evolving from decades of dilapidation.

Marc Augé coined the phrase non-place (a term originally created by Michel de Certeau) to refer to places of transience that do not hold enough significance to be regarded as a place.

"A world where people are born in the clinic and die in the hospital; where transit points and temporary abodes are proliferating under luxurious or inhuman conditions (hotel chains and squats, holiday clubs and refugee camps, shantytowns threatened with demolition or doomed to festering longevity); where a dense network of means of transport which are also inhabited spaces is developing; where the habitué of supermarkets, slot machines and credit cards communicates wordlessly, through gestures, with an abstract unmediated commerce; a world thus surrendered to solitary individuality, to the fleeting, the temporary and ephemeral, offers the anthropologist and others a new object, whose unprecedented dimensions might usefully be measured before we start wondering to what sort of gaze it may be amenable." (Marc Augé, Non-Places – Introduction to an Anthropology of Supermodernity, trans. John Howe 1995)

Inspired by the curiously fascinating atmosphere of the Kupari hotel ruins, Wegner and Weinmann created the conceptual work eins bis sechzehn, in which visual and audible impressions are processed into a series of photographs by Julia Weinmann and a 20-minute composition by Ephraim Wegner. It focuses on the simultaneity of place and non-place — a surreal world originating from the loss of its functionality as a former transit place. Historical and geographic aspects of the hotel deliberately disregarded in eins bis sechzehn are spotlighted in "siebzehn bis ∞". Abstract space is transferred into its concrete locality.

Built in 1919, the Grand Hotel was an exquisite seaside resort for the rich and beautiful from all over the world that during World War II was occupied by German Armed Forces. From the 1960s up to the 1980s extensive hotel resorts were “le dernier cri” for millions of tourists to make their individual holiday dreams come true and Josip Broz Tito, sensing a profitable business, built the Kupari Tourist Complex around the old Grand Hotel. This luxury holiday resort was partly used by the military elite of the Yugoslav People’s Army and their families, but was also open to foreign tourists.

Tito who headed socialist Yugoslavia as prime minister from 1953 to 1980, once described his home country with the following words: “I am the leader of one country which has two alphabets, three languages, four religions, five nationalities, six republics, surrounded by seven neighbours, a country in which live eight ethnic minorities.”

Tito’s tight rein kept ethnic tensions in check. With his death in 1980 the political climate radically changed in Yugoslavia and national and ethnic tensions began to flare. One thing led to another and by 1991 the Yugoslav Wars had started. During that war the Kupari Tourist Complex was destroyed and the following years of looting and plundering turned the hotel complex to not much more than a skeleton of the luxury resort it once was.

"siebzehn bis ∞" consists of unique photos taken while working on eins bis sechzehn. These photos were published in the Off Topic magazine (KHM Cologne) in January 2014 for the first time and are set to music by guest musicians and sound artists, working from the archived material recorded by Wegner. Images and sounds serve as inspiration sources for each artists’ interpretations therefore the strictly chronological and documentary approach is dissolved and the perspective changes dramatically.

"siebzehn bis ∞" (Crónica 096~2015) is now available as a digital release, eins bis sechzehn (Crónica 069~2012), with photographs by Julia Weinmann and artwork by Clovis Vallois, is available as a CD or digital edition.