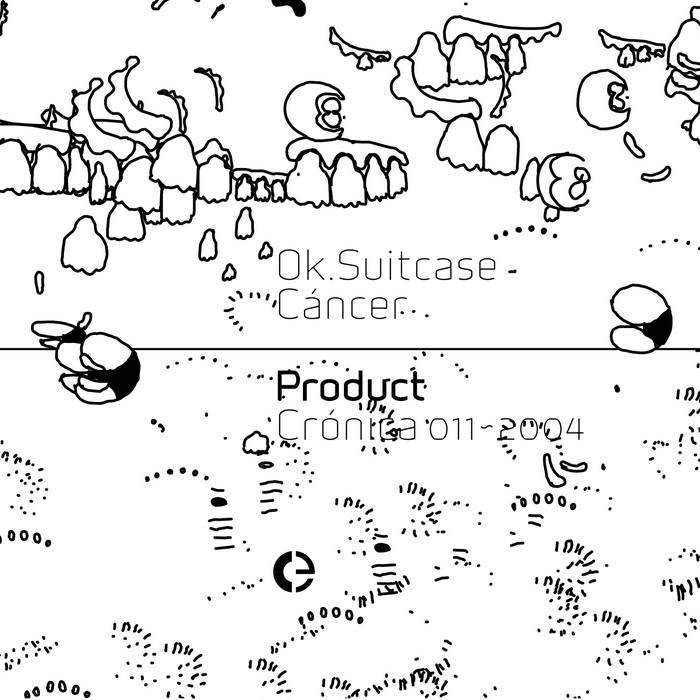 Be it regarded as experimental publishing, or otherwise, simply as the return to the split strategy of the vinyl in a digital medium, the Product releases work as mini-compilations that stand from the synergy between both works, turning the release not in a mere sum of parts but rather in an emergent product of them.

Ok.Suitcase: 04 and 04 1101-6.mov
André Gonçalves started improvising and manipulating sound in 1999 having as main instruments a guitar and a computer. In 2001 he starts the "Ok.Suitcase" project in which he has focused his major attention and developed his major works in sound art and max/msp programming. It's by the hand of Nuno Moita and "Stapletape" that he presented his sound work live for the first time, and since then he has been playing live with them.

At the same time he's the author of the electronic rhythms, synthesis and sound manipulation in the project "In Her Space" and he is playing live with the improv project "Last Time This Happened We Had a Street Party".

Keeping the improvisation concept in mind and always working in real-time he has worked in sound design for theatre with the "Inestética Theatre Company".

In video art he has been developing works for record labels, musical projects and for his own project “ok.suitcase”.

Cáncer: Incoherence Textures
Jorge Cortés comes from Santiago de Chile, where he has been running the local label Ojo de Apolo. From 1997 to 2002 he worked as Cáncer - being now issued in this release - developing a crossing between intimate and pulsating sound, hand in hand with granular soundscapes. His work as Receptor, from 2002 onwards, is geared towards a more minimal click-house sound.

InsertSilence: cover art
The absolutely marvelous and delicious trip as cover art, was specially produced for this Product release by Amit Pitaru & James Paterson contextual studio machine. This inspirational duo creates by the name of InsertSilence, have exhibited work all around the world, and you might have caught their commissions for Bjork, Playstation2, Nike, Diesel and others.

Between these two, Insertsilence have exhibited in London, NYC, San Francisco, Barcelona, Paris, Seoul, Amsterdam and Milan. Their work has been recognized by such magazines as Zoo Quarterly, Surface, Dazed & Confused, Creative Review, Shift, Create Online, Impress Korea, PDN / PIX, and RES, among others.

They have done commissioned work for the likes of Bjork, Playstation2, Nike, Diesel, Burton, Buck 65 and Mick Jagger. They have also taken part in exhibitions at the Design Museum in London, and the Seoul Metropolitan Museum of Art.

Amit Pitaru (b.1974) writes software to facilitate his work and research in the fields of audio-visual art, music, print and interaction design. Pitaru has exhibited and performed concerts in Europe, Asia, and America. As an educator, Pitaru develops curriculums that focus on the coupling of computation-design and creative thought process. He currently teaches at Pratt Institute and New York University's ITP. Born in Jerusalem, Pitaru currently resides in New York with his wife Makiko.

James Paterson is a visual artist who also works as an illustrator, broadcast & web designer.

Paterson's synthesis of drawing, animation and programming has attracted the attention of a variety of galleries and clients worldwide. His work exists online at two primary sites: Presstube.com (his personal space) and InsertSilence.com (shared with Amit Pitaru). James was born in London, England in 1980 and currently lives in Montreal, Canada.