A Compressed History of Everything Ever Recorded, vol​.​2: Ubiquitous Eternal Live 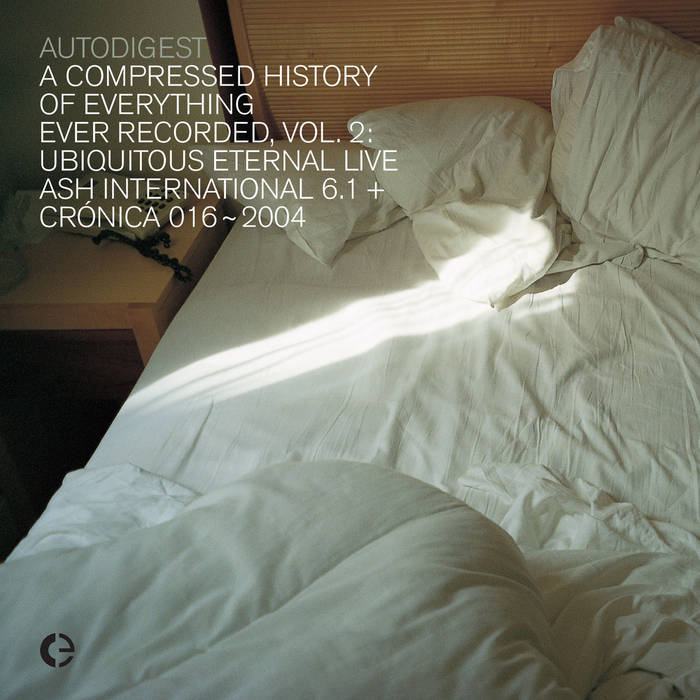 "Ubiquitous Eternal Live" is the second chapter of Autodigest's "A Compressed History of Everything Ever Recorded" series.

Volume 1, from 2003, proposed an aural illustration of current syndromes in digital compression which abandon fidelity, subtlety and complexity in favour of speed, efficiency and endless storage capabilities.

Volume 2, now released, approaches the History of Recorded Sound under a considerably different perspective: it brings together all the audiences ever recorded and has them share one hour of hysterical, progressively apocalyptic applause. This is presented as less of an archive and more of a critical eye loaded with a few conceptual cards as foundations, from Debord to Baudrillard, from Harvey to Adorno.

Ultimately the song remains the same, but our relationship with it has changed beyond recognition and redemption. Just try to imagine what a concert would mean to an audience before sound could be recorded... yes, we've come a long way, baby - and maybe, just maybe, deserve to end up with those one hundred million songs in our pocket. The choice, it seems, is pretty much down to the cute colour, pattern or ringtone of the week.

"Ubiquitous Eternal Live" is a joint release by Ash International (UK) and Crónica Electrónica (Portugal). The audio track was assembled and composed in Portugal in early 2004, and was mastered by Denis Blackham in April 2004.

If you like A Compressed History of Everything Ever Recorded, vol.2: Ubiquitous Eternal Live, you may also like: